Round table and panel discussion held on 26.06.2020 in Bihac; Bosnia and Herzegovina 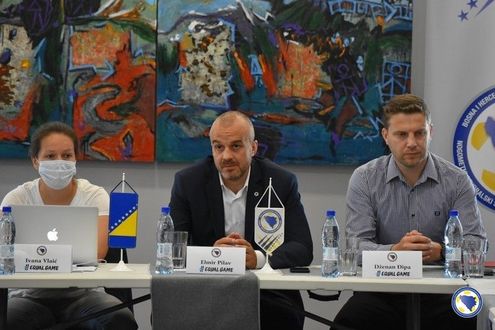 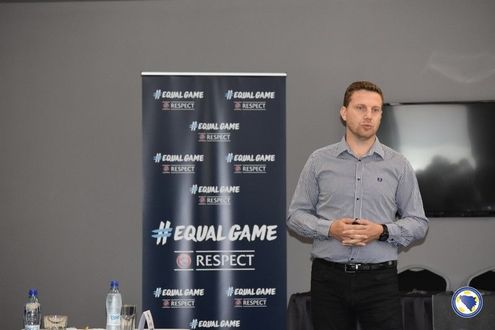 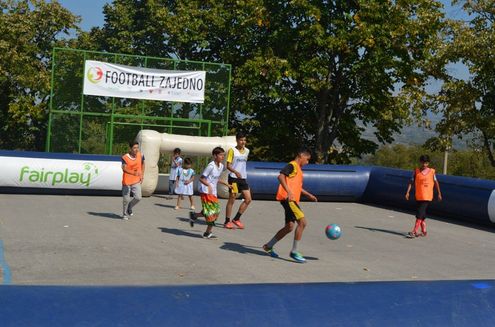 The project of the Football Association of Bosnia and Herzegovina "Integration of migrants through football" was chosen by UEFA among the best 6 projects that will be financed in the next year. Bosnia and Herzegovina have been challenged by the refugee movement for several years, and the country's northwestern part which borders with Croatia is currently one of the most prominent parts in the region, where migrants and refugees are placed.

This project came at a great time when help and raising awareness is desperately needed for refugees and the local population. IZI (Igramo Zajedno Inicijativa - Play Together Initiative) as a new local partner of the new season of the Football Zajedno project, got an invitation from the Football Association of BiH (NS/FS BiH) to be one of the partners in the implementation of the project.

Grassroots manager Dzenan Đipa presentated the project as well as an overview of the current situation. In 2019, 29.000 migrants entered Bosnia and Herzegovina, they mostly stay in Bosnia for 60 to 90 days and trying to cross into the EU. In the country there are 4 official camps "Bira", "Sedra", "Lipa" and "Borici". The camps Sedra and Borici are intended for children and families, while the remaining two accommodate men.

The main goal of this project is to give children as well as adults the opportunity to register and play for local clubs. Of course, there are many risks for that, but it is definitely possible according to the FIFA rules, which give the possibility to register migrants. The goal is to enrich the daily activities in the camps, but also to try a connect them with the local population.

"In addition to our desire to include refugees and migrants in society and alleviate the difficult situation in which they find themselves, the project wants to enable, especially the youngest, to register in local clubs and play football", are the words of the director of the sports sector NF/NSBiH Elmir Pilav who opened the round table in Bihac.

The first steps will be to conduct a survey of how many people are interested in participating in the activities. In the end regular trainings should be organised , fairplay workshops, training of referees, tournaments as well as joint trainings in local clubs.

After the presentation the participants had a concrete discussion and perhaps surprisingly everyone had a positive opinion and welcomed this project. Representatives of the Cities of Bihac and Cazin, where the camps are located, expressed their opinions as well as the possibilities of providing the city sports halls and football fields for the needs of the project.

FK Jedinstvo Bihac has already significantly contributed to the integration of migrants into the local community, those most interested have the opportunity to use their stadium as well as to train with the local team.

IOM representatives who are working in the camps and are in direct contact with the refugees were more than enthusiastic about this project and can't wait for the activities to start.Every day we all try to create fun content together in the camp, so this help and activities of NS / FSBIH will be a great benefit, especially in this period when because of the coronavirus is forbidden to leave the camp.

After a short discussion, NS / FSBIH partners from the fairplay initiative/VIDC, David Hudelist and Kurt Wachter, as well as the representative of the Football Association of Ireland Des Tomlinson, presented their experience and projects they implementing with refugees via a video conference.

The first to speak was the Intercultural National Co - Coordinator of the Football Association of Ireland, Des Tomlison. The Football Association of Ireland is very active in implementing projects independently or in partnership with other organisations. There are currently 10,000 refugees in Ireland who are accommodated in 34 centers. One of the activities that especially attracted the attention of participants was "Kicking off with English Language Skills". Migrants in the training center have the opportunity to learn English in the morning, to begin with they learn phrases and words that they can use in the game, and in the evening, they have the opportunity to play and use it in practice.

The Football Association of Ireland is one of the partners of the SPIN (Sport Inclusion Network) project which coordinates and leads the fariplay initiative. Project Coordinator Kurt Wachter was pleased to present to us what they are doing. The project “Sport Welcomes Refugees” aims to improve participation of migrants and refugees in sporting activities, and to reach this final objective it produced a set of training materials and suggestions to act as tools to help sport clubs and organisations who want to implement work with refugees.

Among these instruments the SPIN network created an animated awareness video with useful tips and suggestions. The video is born from analysis of the results of focus groups research conducted in 8 partner countries on the challenges & difficulties that clubs have in their daily work with migrants and refugees.

The protagonist of the video is a male-white-football coach, representing a kind of stereotype, called Ralph. Ralph wants to start to use sport to include people and tell other sports coaches of the obstacles he faced and solutions he adopted.

The fairplay Initiative is also the leading organisation of the “Football Zajedno” project, which is implemented in cooperation with the Football Association of Bosnia and Herzegovina, Montenegro and Serbia through the UEFA HatTrick program and the support of the Austrian Development Agency. The Football Zajedno project is using popularity of football as a medium for intercultural dialogue and promotion of human rights and social inclusion. "A focus is on the empowerment of disadvantaged groups and enhancing the equal participation of girls and woman in and trough football", said project coordinator David Hudelist.

The Mini Van Tour project activity visited the refugee camp in Vranje (SRB) where several stations were set up,streetkick field, microsoocer, fairplay workshops, as well as a fun DJ station. The workshops were led by experienced workshop leaders who adopted the working methods at the “Football Zajedno” training for trainers. Hudelist pointed out that the challenges in working with refugees can be (language barriers, cultural background, concurrency, jealousy, competition, trauma, aggression) and that trainings should be led by educated fairplay trainers.